The Inglewood Sentinels haven’t had many game challenges lately, as their schedule the last several weeks has been mostly blowouts. But they got one last night in the Mira Costa Mustangs, who kept it close until only the last four minutes of the game on Inglewood’s home floor.

The Sentinels got off to a fast start in the first, on the strength of the scoring of Oregon State University signee Tayler Champion and Renee Golliday. But Mira Costa battled back behind their star players Jasmine Rutledge and Amanda Johnson. The Sentinels lead 22-18 at the end of the period.

Playing a 1-3-1 defense, the Mustangs clamped down in the second quarter, and Inglewood began turning over the ball. Rutledge again lead the scoring attack, and her team was up 27-26 at the 3:42 mark. But when Mira Costa changed to a loose 2-3 zone, Inglewood seemed to suddenly realize they could attack the basket, and they did, drawing a foul. The half ended with the Sentinels up 31-30.

The home team began to pull away in the third, but with just over three minutes left, the Mustangs fought back. A long three by Johnson cut Inglewood’s lead to 39-35, and Rutledge’s crazy-good shot cut it even further, ending the period 39-37.

In the fourth quarter, the Sentinels put their foot on the gas pedal and took control. They had built an eight-point lead by 3:22, when Hazel Ramirez threw up a wild shot which went in as she was fouled. On the other end, Rutledge’s shot was blocked, but incredibly, she caught the deflected ball. Yet her second attempt didn’t go in and the ball went into Sentinel hands, enabling them to continue their attack. The score was 54-40 with 1:24 left, and only Kylie Nakamine scored – a three – for the Mustangs before time expired.

Mira Costa has excellent ball movement. Team members always seem to know where the others will be when they’re running a play or just winging it. Inglewood’s strength is in their athleticism, which is likely why they played man defense all night.

Rutledge finished with 16 points and nine rebounds. Johnson put up 14. As of right now, Inglewood coaches have not yet put up game stats for their team on maxpreps.

This game was interesting in an “it’s a small basketball world” kind of way, too.

For one, Inglewood reserve guard Brionne Brister is Sparks center Lisa Leslie’s niece, and Leslie comes to most games, fans said. (She wasn’t there last night because she is reportedly attending the NBA All-Star game this weekend). Leslie’s younger sister also attends Inglewood games, and was sitting behind the bench last night.

Three USC players walked into the game during the second quarter and took seats in the bleachers. I recognized Hailey Dunham, and I think the second one was Aarika Hughes. I couldn’t get a good glimpse at the third player. But after the game, Rutledge – a junior – ran across the court to say hi to the Trojan players, and all four stood there for a moment, laughing and talking.

USC Coach Mark Trakh’s detractors aside, he does seem to have a knack for recruiting.

Sentinel fans said Coach Tony Scott disappeared from the bench for a while after the forfeits were announced in January. He is back now, in an assistant coach role. But he is still pretty much the only coach standing and yelling directions at the team during play, though his seat is on the end of the bench. So perhaps the assistant coach job is in name only.

Here’s the Inglewood bench last night: Scott is standing, at the right. Leslie’s niece is the second player in on the left. Leslie’s sister is wearing the red shirt behind the bench. 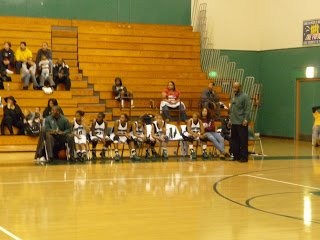 Sparks open training camp with talent and optimism on hand

Another grip of news