Considering Mater Dei runs 16 deep to Cajon’s nine – and that only five of those nine can actually play – the Cowgirls made it much more of a game than I thought they would. For that, I give them props; I thought they’d get whooped by the number one-ranked team in the country by at least 20.

But in the end, Cajon was worn down by the suffocating, relentless defense of its opponents, and by the tiers of Mater Dei players that always kept fresh legs in the game.

The game was neck-and-neck for the first half of the first quarter, with Cajon’s Darshae Burnside and Mater Dei’s Mya Oliver leading the charge for their teams. But then Monarch Coach Kevin Kiernan put in sophomore forward Alexyz Vaioletama, and the momentum shifted.

Vaioletama hit a velvety floater. One Cajon turnover later, she forced a shot in from the low post. At the first quarter buzzer, Vaioletama caught a very long pass and laid it up and in to put her team ahead 20-8.

She continued her assault in the second quarter, hitting two consecutive shots and stealing the ball and making a bucket; she finished the half with 11 points. 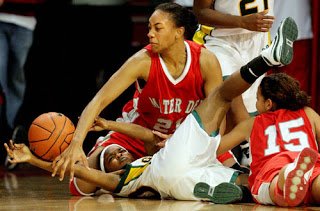 But Cajon’s superstar guard Layshia Clarendon heated up in the second quarter and ignited a run for her team. On every posession she fought to get the ball up court, and she hit a three-point field goal while teammate Kori Walker hit two successive shots. Through fighting to get the ball up court and making a lot of shots, the Cowgirls first closed the gap and then took the lead, 32-21, at halftime. Clarendon had 16 points and Burnside, nine.

Cajon came out blazing in the third quarter, and Clarendon’s quick scoring increased their lead 38-31. But a big shot by Mater Dei’s Kaleena Mosqueda-Lewis suddenly put out their fire. Behind the sophomore guard, the Monarchs went on a 16-0 run before the Cowgirls were finally able to score again with 1:57 to play in the period. Mosqueda-Lewis and Clarendon continued to trade baskets, and it was 51-44 at the end of three.

The Cowgirls got as close as five a couple times in the fourth quarter, but it was the Mosqueda-Lewis show. Watching her hit shot after shot, I forgot that she’d only scored two of her game-high 21 points in the first half. In fact, it was her baseline drive for the bucket and the foul with 37 seconds left that sealed the victory for Mater Dei, putting them ahead 64-56 – the final score.

Mosqueda-Lewis also finished with six rebounds and three steals, as did Vaioletama, who also contributed 13 points.

Clarendon had 28 points, four rebounds and three steals, while Burnside put up 13, grabbed 10 boards and had three blocks. Her status is not known, as she went down with what appeared to be a rolled ankle after a drive with 21 seconds to play. No one from Cajon showed up for post-game interviews with the media. 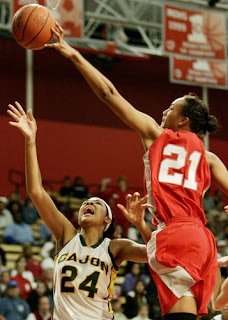 Vailetama blocks Burnside’s shot in the second half.

Mater Dei Coach Kiernan is in his second season at Mater Dei, having come from Troy High School in Fullerton. There, he guided his team to three state and five Southern California state titles in 11 years.

He admitted to maxpreps.com that he is “trying to build something very special here,” but said he is ahead of schedule.

I’ll tell you one of the reasons why: defense. I’ve not seen a full-court press like Mater Dei’s before. I don’t even know what you’d call it.

First, they put two defenders on the inbounder, or whomever is in the backcourt alone with the ball. Cajon turned the ball over a couple times before they figured out they needed to put the ball in Clarendon’s hands to start, because she was the only one with the acumen to get it out of the trap. Even so, it required the Cal-bound senior to bob up and down or lunge through the two defenders just to make the pass. If the ball gets past the first person, there are three other Mater Dei defenders waiting to shut down the offense. The Monarchs are a very tall team.

Another reason Mater Dei has risen to the top is that they are just loaded, and most of the best players are underclasswomen. Besides Mosqueda-Lewis and Vaioletama, they’ve got freshman point guard Jordan Adams and freshman guard Taylor Spears, each of whom average eight points and four assists per game. Senior Kathryn Haugen and junior Lauren Rock are also heavyweights on the team, and sophomore guard/forward Jessica Duarte is on the rise. Oliver is also a solid contributor.

Clarendon was impressive – much more so than in the Brea game two weeks ago. She only walked the ball up the court once, in the second half, and that was to slow down the feverish pace of the game. Mater Dei didn’t give her that luxury the rest of the time, and Clarendon handled it well. She really had to push hard to get the ball up the court on every single possession, and she’d just put her shoulder down and pound the ball into the floor, spinning away from a defender if she had to. Clarendon also made some pretty improbable shots. Mater Dei made her work hard for every single point, and she’s got a lot of endurance in that skinny little body.

But despite her undisputable skills, I decided last night that I’m not a fan of Clarendon or her team. They seem to thrive on displays, and I’m not big on drama. Even Paul Westphal, at one point in his broadcast, chuckled and said, “my but Cajon certainly has a flair for theatrics.” Indeed.

Clarendon was knocked to the ground several times as she fought to get the ball up court, and with each time, she made a bigger and bigger show out of getting up and grimacing. One time she was knocked to the ground mid-court, and laid there on her stomach for almost 30 seconds, sucking wind. Late in the game, Clarendon would step back and bend over for a few seconds before putting up a free throw.

I’m not saying that playing an intense, forest fire of a team like Mater Dei is easy, and I’m quite sure Clarendon was really tired. But the Monarchs were also fighting hard, and for their undefeated lives, and all they did was sweat a lot – there were no facial or emotional displays. Plus, everytime Clarendon went down, not one of the four coaches on the bench made a move to get out of their seats to help her. Granted, the minute a coach walks on the floor the player has to be taken out, and Cajon needed her for all 32 minutes. Still, they could have put her right back in, which lead me to think they knew what was up with her.

Cajon, as a team, also had trouble getting off the floor when they were warming up at a basket. First it was at halftime of the proceeding game, when Foothill came back to their seats and needed their basket. Then it was prior to their own game, when Mater Dei players were already lining up for intros while Cajon players ignored assistant coach Krystal Gray’s admonition to “come on!” for their own line up.

Before the game, Mater Dei players went to shake hands with all the refs. After the game, Mosqueda-Lewis, Vaioletama and Kiernan spoke with reporters and posed for photos. No one from Cajon came to the media room.

The referees did indeed seem biased towards Mater Dei at times, but I hope Cajon didn’t let that take them out of their game. Every great coach will tell you, don’t let the refs get in your head.

The one downer of the night was that Burnside apparently turned her ankle as she drove for the basket with 21 seconds to play. Her shoulders shook as she lay on her side, and this time the coaches did come out on to the floor. I hope she’s allright. Her team really needs her.

Teams or partial teams in the house to check out the matchup: Brea Olinda, Bishop Amat, Riverside.

There are cameras in the ceiling of the gym. A guy that said he worked there tried to tell me they were spotlights, but when they lit up the spotlights for game intros, they were not them. I know a camera when I see it. Why would Mater Dei have cameras in a ceiling of a gym?

Foothill’s Christina Marinacci put up 27 points – 18 in the first half – in her team’s game against Long Beach Wilson, prior to the premiere game. Marinacci is off to USC next year, which explains why Trojan Coach Mark Trakh was in the house. 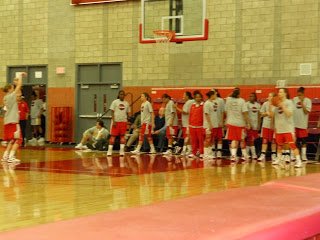 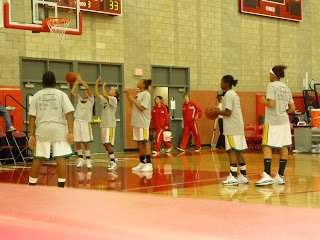 Mater Dei (top photo) and Cajon warm up before the game at their respective baskets.

No change in playoff standings, but…….

A big cut, a big win

Every game counts in large amounts