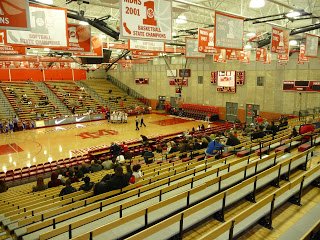 The Southern Section playoffs are moving from Long Beach State’s “Pyramid” this year to Mater Dei High School. The LA Junior Nationals tourney might be played there in April. And why, you ask? Take a look at the photo above.

Gorgeous facility. Only three years old, too. All the bleachers have seat backs; there is a large color monitor on each end of the court that shows the game and score. There are two long tables on each side of the court – one for the stat keepers/clock workers, and one for the press. The stat keeper side has a video screen on the front, facing the court, that constantly scrolls ads (in the pic it has the Nike swish going at the time). The floor has been done three times, according to staff, and the facility seats 1300-1500. In other words, it’s a real arena.

I had a good time tonight. After a lopsided Foothill-Long Beach Wilson game, I witnessed an intense, hard-driving matchup in Mater Dei vs. Cajon. I’ll post more specifics tomorrow. But it was funny who I ended up sitting next to at the press table for the premiere game.

I came back from getting stats and this guy had set up shop one seat away from me with his laptop and a whole bunch of notes that lined his entire space. I was impressed with that, but was too busy watching warm-ups to pay him much more attention. That is, until the team intros were completed and he suddenly put on a headset with a microphone and began talking into it.

“We’re here at beautiful Mater Dei High School with its amazing athletic facilities, in the Mereulo Athletic Center,” he boomed. “This is Paul Westphal, and this is vootage.com.”

So I’m sitting next to a basketball legend that might still live in my hometown Seattle, calling the game for the website I’d posted on my blog before I came. Just ask my kids – this kind of thing happens to me all the time.

Westphal was amazing. He’d done all his homework, so he spoke with authority about every player, provided flawless description of the goings on as they occurred, and kept stats (points only) as he spoke. I felt like a punk.

At a timeout when he took the headphones off, I asked him how long he’d been doing it and he said 20 years. I told him he was great, and that his comments were right on. He was very sweet. And at one point in the second half, I leaned over to look and see how many points he had down for the Walker kid; he was right on the money.

Mater Dei has a hell of an athletic program, as you can see by the million championship banners hanging from the ceiling. And they play crazy 70’s music during game pauses, like KISS and “Kung Fu Fighting.” But they’re great hosts, and their organizational skills are amazing.

Way across the Los Angeles area, my favorite high school team also won their game, putting them undefeated so far in their league. WOOT!

And though Mater Dei isn’t my favorite team, I can now say they’re one of my favorites. This is amusing, because I didn’t even expect to like them.

More after I get some Z’s.

Griner will be a no-show at McDonald’s All-American game?

The next big Pac 12 rivalry: Oregon