The Bruins finally played an athletic, solid team who beat a ranked opponent last week – and beat them. So that might shut up some of the naysayers for 45 seconds.

But I’m hung up on the number 54 right now. Because today, for the third game in a row, UCLA pulled down 54 rebounds.

I’m like my role model Pat Summitt; I understand why she reached down into that toilet a decade ago to pull out the lucky penny. So I wonder what is up with the number 54 – que significa? I’m sure we’ll find out eventually.

Nevada played the Bruins tough today: they were physical, and played some serious defense. In fact, they shut down all UCLA post play early in the game by keeping them from getting inside. Coach Nikki Caldwell acknowledged that in her post-game interview.

“I challenged them at halftime to get the ball inside, and they responded,” she said.

Despite the difficulties, UCLA lead comfortably throughout the first half, but in the second half, Nevada went on a mini-run and closed the gap 33-27. Thanks to sophomores Darxia Morris and Christina Nzekwe, however, the Bruins went on their own run.

Morris, who ended the day with 10 points and six assists, unleashed some jumpers. Nzekwe, who posted four steals, six rebounds, five points and one block she wasn’t credited for, played some amazing defense. At times she completely shut down her opponent. The Bruins, who had been turnover-happy in the first half, cut them down to almost nothing. Forward Chinyere Ibekwe also pitched in 12 boards and eight points on the day.

Nope, and it’s nice to see. This team is growing extremely fast.

The only fault I’d find with them today was their shooting percentage: 29.7 for the first half and 48.1 for the second for a total average of 37.5. Their free throw shooting also still needs work. Caldwell noted some things too at a first-half timeout. From my seat, I could hear her tell the team, “Offensively, we’re better than them, but we’re bailing them out. Quit fouling!”

They have an entire week before their next game, so I’m sure Caldwell has several things in mind for practice this week.

Every game, the crowd gets bigger and bigger. Daniel and I are very encouraged. And Caldwell took the time to thank the band, the cheer squad and the fans during her post-game time at the mic. Daniel also noticed that the coaches seem to recognize some of the regular fans now; relationships are being built!

Tennessee fans will appreciate that Caldwell has a small stool to sit on during timeouts that looks a lot like Summitt’s special stool, except that it’s blue. I wonder if she’ll take it on the road with her the way her mentor does.

Below are some photos from an earlier game this season. I thought non-LA residents might appreciate seeing what the team huddle and the Caldwell post-game interview look like from my point of view. 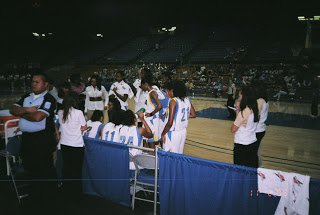 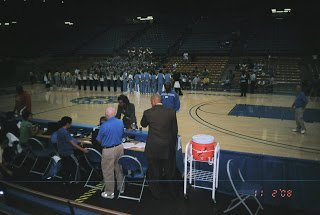 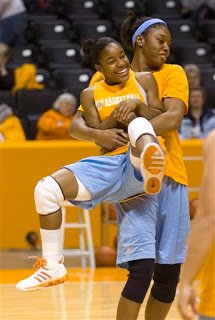 College items back on top of the news